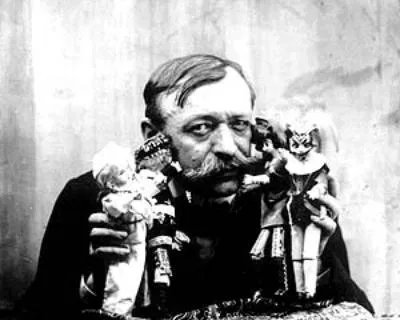 Emile Cohl, usually working alone, made some 300 shorts (of which about 80% are considered lost) with about 100 brief cartoons, drawing and photographing each frame himself. Cohl introduced the first regular cartoon character, “Fantoche,” a little puppet who appeared in several of his films, and the first cartoon series, “The Newlyweds and Their Baby” (1912 to 1913). He also developed an animation trick he called “Metamorphosis” (now known as “Morphing”), achieved through skillful use of line, in which a character or object seamlessly transforms into another. Most of Cohl’s films are considered lost. Though rudimentary, Cohl’s surviving work still has the power to charm and amuse.

What is interesting in Cohl’s work is that, in addition to having invented the animated cartoons with his “Fantasmagorie“, he gave animation a sense of poetry, a plethora of innovations, and made it an art in its own right, dubbed by some as the “eighth art,” which combined cinema, drawing and painting. Thanks to the intellectual experiences of his youth, Cohl gave free rein to his imagination and made films in which critics have discerned the influence of cubism, but also the premises of surrealism.

Walt Disney acknowledged as much when he was decorated with the Legion of Honor, and many animation filmmakers, such as Norman McLaren, Winsor McCay, were influenced by him, forming what one might call the Cohl School. Reflecting on the sad fate of film pioneers like Cohl, historian David Robinson mused, “The Cinema has never been a grateful child.”

Today an Emile Cohl Prize is awarded annually in France for excellence in animation. The whole world call him “Father of Motion Picture Animation”.