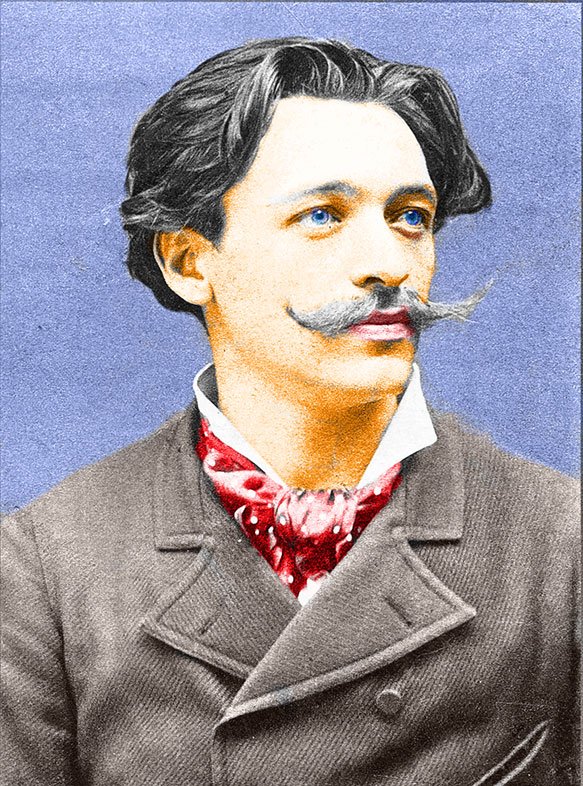 Émile Courtet was son of Elie Courtet, a rubber salesman, and Emilie Laure, a linen seamstress. The rubber factory Elie worked for had many ups and downs.

In the first few years of Émile Courtet’s life, France was ruled by Napoleon III of France. Émile saw little of his father during his childhood because of his rubber factory work and his mother died in 1863. In 1864, at the age of 7, he was enrolled at the Ecole professionelle de Pantin, where his artistic talents were discovered and encouraged. The next year, a cold kept him in his father’s apartment, where he began stamp collecting, a hobby which later became his sole source of income several times in his life.

On July 15, 1870, the Franco-Prussian War began. France was invaded and Napoleon III was forced to surrender on the battlefield of Sedan and Adolphe Thiers was elected President of France. Thiers was too conservative for many Parisians, so a Paris Commune was declared, a sort of anti-government of radicals. The siege of Paris led to the closing of Elie Courtet’s factory. Émile was transferred to the less-exclusive Ecole Turgot, but he often wandered the streets of Paris. He made two discoveries that in time that became the controlling elements of his life: Guignol Puppet Theater and political caricature. Political caricature, although was suppressed by Napoleon III, the caricaturists were free to post broadsheets on the streets during the free-for-all weeks of the Commune for all to see. The center of this activity was very close to Ecole Turgot, The Rue du Croissant.

For next few years, Emile did apprenticeship with different businessmen but never left caricature drawing. He declared his preference for drawing, the Bohemian lifestyle, so obviously had to often go hungry.

In 1878, Émile obtained a letter of recommendation from Etienne Carjat to approach André Gill, the best-known caricaturist of the day, for a job. Emile’s job as one of several assistants to Gill was to complete the backgrounds; he may have done a few of the illustrations by himself. During this process, he developed a style of caricature based on Gill’s, a fantoche puppetry style. Émile took this style and added his own touches to suggest movement and imagery from the rest of guignol puppetry.

At about this time he adopted the pseudonym of Émile Cohl.

The new president Patrice MacMahon, duc de Magenta, steadily became less popular under the assault of caricatures. One of these, “Aveugle par Ac-Sedan”, a French pun on “accidentally blind” and “Bungler at Sedan”, put its creator, Émile Cohl, in jail on October 11, 1879, making him instantly famous. Three months later, MacMahon resigned in disgrace.

Through Gill, Cohl had become acquainted with an artistic circle calling themselves the Hydropathes, a group with various “modern” ideas and a love of poetry and based most of their activities on shocking people. Cohl was named editor of the group’s spokes-piece, L’Hydropathe. At about this time Émile’s father died, leaving him a modest legacy. Émile Cohl set out to discover his abilities, writing and producing two satiric plays which flopped. The co-author of both plays was Edouard Norés, an American architect, a very good friend of Emile. Norés taught Cohl English, a useful skill later on.

Émile Cohl married on November 12, 1881; his wife later left him for an author. At the same time, André Gill was committed to the Charenton mental asylum. Meanwhile, the Hydropathes had disbanded in 1882. Their place in Cohl’s life was replaced by the Incoherents. The Incoherents were even less politically-minded than the Hydropathes, the focus was absurdism, nightmares, and the drawing style of children. Cohl’s Incoherent art joined his caricatures and satiric news reporting at La Nouvelle Lune, where he had become the major contributor and acting editor. He became editor in chief on November 30, 1883.

Cohl’s daughter Marcelle Andrée was born in May 1883. André Gill never recovered his sanity & died on May Day, 1885, with only Cohl by his side. Cohl never forgot Gill’s desertion by his friends and the public. The Incoherent movement collapsed in 1888.

After the collapse of his marriage, Cohl moved to London to work for Pick Me Up, a humor magazine that specialized in French artists. He returned to Paris in June 1896 and married Suzanne Delpy. Their son André Jean was born on November 8, 1899. By this time, Cohl had moved away from caricature, sending humorous drawings to various magazines. He also wrote articles on French history, stamps, and fishing. In July 1898 he started contributing to L’Illustré National. This marked the origin of Cohl’s comic strips. At the same time, Cohl’s art was changing from scene-setting to story-telling, and from the Gill fantoche style to Impressionism. His other interests during this period included puzzles, toys, and drawings of figures made from wax matches. In the political arena, he submitted anti-Dreyfus illustrations to La Libre Parole Illustrée. 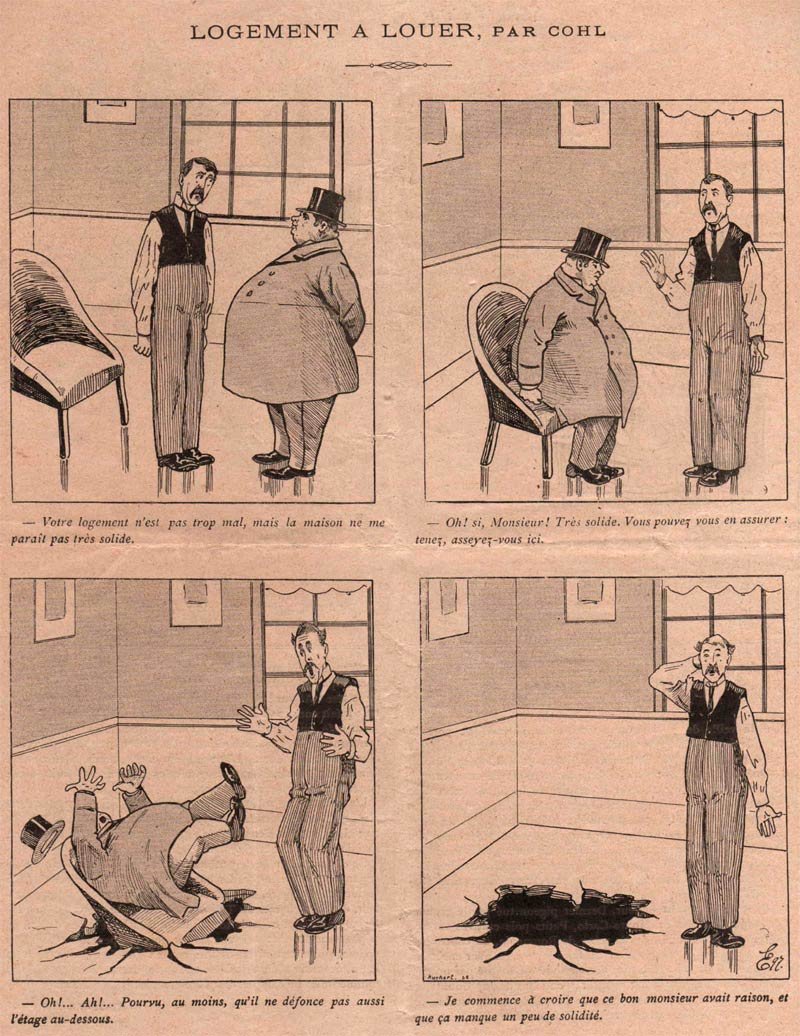 Comic strip by Emile Cohl for Polichinelle, 9 May 1897.